A car was seen overtaking on double yellow lines on the Matata Straights/State Highway 2 on Wednesday. Video: Glenn Dellaway Smith. 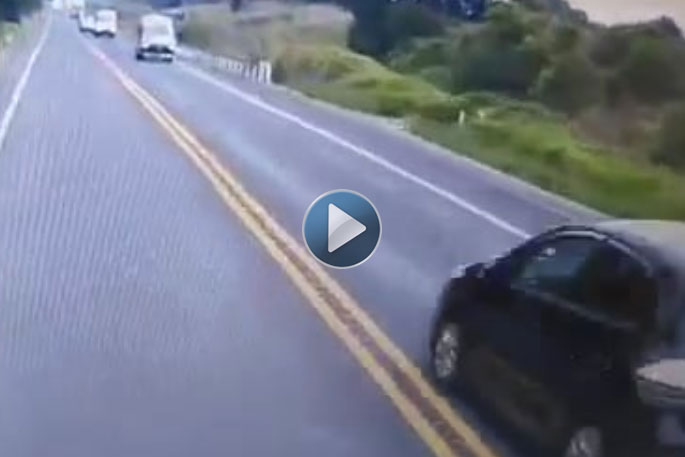 Many motorists are scratching their heads after witnesses a number of “idiotic” driving acts in and around the Bay of Plenty.

SunLive reader Glenn Dellaway Smith snapped one such act on his dash cam while driving along the Matata Straights/State Highway 2 on Wednesday.

“Saw this idiot who could have caused a major accident on Matata Straights at about 12.35pm,” he says.

The video shows the vehicle overtaking on double yellow lines and into the path of oncoming vehicles.

Another incident snapped on camera recently, shows a vehicle wedged between a truck and trailer unit.

Images of the unusual Bay of Plenty crash have been circulating on social media, and police said it happened around 11.30am on Tuesday.

It blocked one lane of State Highway 29 in the Lower Kaimai area but was cleared up in a couple of hours, says a spokesperson.

There were no reports of injuries and - as yet - no information on how the car ended up in that position.

You have got to be kidding. Don’t sit there making excuses for some lo life that’s willing to blatently put the lives of other road users at risk and ultimately destroy a families life. He was causing other road users to take evasive action to avoid a head on by wreckless disregard. I agree totally with Justin T that you have just given reason to have your license revoked.

Scott you have just given all the reasons to have your license revoked if that is what you really think. Two wrongs dont make a right and in a court of law the driver of the Toyota Blade will go for a scate because there is undeniable proof he/she did everything wrong and thank the MOT the license plate in the video is easy to read; at least we will get one of you off the road. Kindest regards Justin T.

Its easy to put all the blame the over taking driver. What we don’t know is why the driver was forced into making this risky move. Looking at this photo the car being overtaken looks to be nearer the center line than the shoulder indicating the driver had made no attempt to pull left to allow the idiot to pass safely albiet one crossing a double yellow. So no love lost there. People pass like this due to frustration. Maybe webcam car ( or more likely truck) was holding up traffic, speeding up in passing lanes, also as it were driving like an idiot. Get one idiot holding up traffic and not keeping left or slowing to allow faster moving traffic to pass safely and sure as, a normal driver may try and pass, becoming an idiot, then you have two idiots. Result outrage and indignation.

Kefe and The Professor,totally agree with you two.I have advocated this for many years now.NZTA keep wanting to lower speed believing it will reduce the road toll.They dont want to raise driving age ,reduce engine size and power for L or probation drivers and for better training,tougher driving test.Single car accidents and death is the drivers fault.Drug tests need to be introduced.We can only guess how many drug induced driving accident and suicide is due to mind altering stress

Total reckless deliberate disregard for others. He/she should have their car crushed a hefty $ fine, and community service. I hope the Police are able to identify the vehicle and driver. Hey Professor, where do oppose the stupidity of the speed limit drop? Agree with Professor, it’s not the roads, it’s the idiotic morons. Had that van and St John vehicle gone off the road the car that caused it would probably have just kept on going. What an absolute W NKER.

With Kefe and the Professor... well put.... you can spend as much of our hard earned cash trying to fix roads that are already in reasonable condition.... but you can’t fix stupid! I might add, drivers doing 60kph in a 90kph zone (thinking they are being safe) can cause motorists behind to do less than sensible things (dangerous overtakes) ... so really, if someone cant do the speed limit (or wont) or maybe a few kph under, then they should pull over and let those wanting to do the speed limit pass.... or find out the reason these slow drivers can’t/wont and either get them off the road, or teach them how to not block our roads. I have witnessed some silly/risky driving passing these slow road hogs/right lane hogs... perhaps the Police should start booking them and find out why they are unable to do the limit?

......this is exactly the type of moron wo is going to get the speed limits reduced on the SH2. I have said it many times, there is nothing wrong with the road and there is nothing wrong with the existing speed limits...........it’s the idiots driving on the roads that is the problem. This moron not only endangered innocent lives, but he or she is jointly responsible for the inevitable reduction of speed limits, making travelling along the SH2 even more painful than what it already is!! Make sure you all oppose the proposed reductions before the closing date!!

Seen something similar driving back from Hamilton yesterday. A car decided it needed to be in front of another even though the passing lane had ended. Went on the wrong side of the road to get past straight into the path of oncoming traffic that had to pull off the road to avoid a head on. Its not the roads getting worse, its the impatient drivers. These people should have instant loss of licence for 30 days. Disgraceful