A little spring chaos ahead across NZ

Sunrise in the Bay of Plenty.

WeatherWatch is reporting that there will be a cold snap this coming week in the south, with temperatures dropping over 10C, some low level snow appearing, and then back to mild weather again.

“Spring chaos continues next week and while temperatures this weekend are several degrees above average in many regions it will be a very different story next Wednesday and Thursday,” says a WeatherWatch spokesperson.

“As we end September and head into October we often get more and more hints of summer being around the corner - but we do get these reminders, sometimes quite abruptly,  that winter has only just technically ended - and like a powercut to a freezer the arrival of spring doesn't mean the winter cold is instantly lost.”

The Metservice report that a front is forecast to move north across the South Island on Monday, and then across the North Island on Tuesday bringing a period of heavy rain and strong west to northwesterly winds.

A narrow ridge will moves northeastwards across New Zealand later on Tuesday.

The Metservice advise that on Wednesday, another front will be moving quickly northeastwards across New Zealand, preceded by a strong northwest flow and followed by a change to strong, cold and showery west to southwesterlies.

“In addition, snow is likely to affect some higher roads and passes over the South Island from Wednesday, and the central North Island High Country on Thursday, with snow possibly lowering to 500 metres in the far south of the South Island. However, warning amounts of snow are not expected with this front at this stage.”

WeatherWatch say that the cold snap coming on Wednesday and Thursday will be short lived but it will be cold for some, mainly those in the southern half of the South Island.

“For newborn livestock it will be a tough day or two there. The cold air does make it up the North Island too - but not as significantly.

‘It will be cold in the east of the North Island on Thursday and windy elsewhere.”

Parts of Southland, Otago and Canterbury are now expected to lose over 10 degrees from their daytime highs over the next couple of days with some places getting up to 20 degrees or into the late ‘teens’.

“By next Wednesday and/or Thursday, highs in the lower South Island will be just 5 to 9 degrees, with snow flurries possibly affecting Queenstown, Gore and Lumsden and the hilltops of Dunedin. But totals won't be great and it's unlikely to settle that low with ground and air temperatures both too mild. The main risks will be for motorists on alpine passes and newborn livestock.

“But Thursday will be a windy, colder, day nationwide with a strong sou'west flow covering much of New Zealand.”

To round this off, in true spring style we may have a warm sub-tropical flow returning as early as next Saturday. 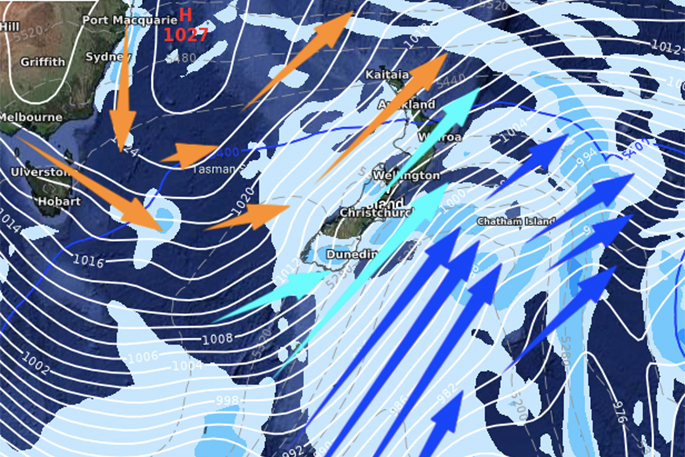