What the hell have you done to the place?

Rogers has been through major surgery and is now in Rest and Recovery Mode for a few months.

Resurfacing this week for a gander at the local and national news scene and I have to say, it’s not pretty.

What the hell have you done to the place?

I get distracted for a minute, and the place goes to rack and ruin.

There are taxes upon taxes.

While I was busy preserving fossil fuels and sequestering carbon, the rest of you have let the side down and climate change is still rampant.

My gas guzzler, as the government has rudely classified it (despite being a more efficient and cleaner vehicle than most of the tanks they drive), has been sitting idle for much of the winter due to my incapacitation, so you can’t point any fingers at me.

Meanwhile, armed criminals are having a chuckle at the stupidity of the nation… watching on with amusement while thousands of decent, law abiding and safety-conscious gun owners have handed over their supposedly dodgy firearms, but the real bad asses still have theirs. I haven’t seen lines of gang patches in the queues to hand over weapons. How many gang members have surrendered? (insert sound of crickets chirping here)

The gun buy back is an epic fail so far if you’re expecting to get guns from the actually mentally dangerous perps. Police this week admitted it could take three years to reclaim those weapons ruled illegal.

Here at RR, it’s clear that only the responsible will hand them over.

The rest of the world hasn’t achieved much of note, I see Trump is still gooning around in the White House and Britain, which seems incapable of Brexiting, has found their own buffoon Boris, in some sort of ‘our loonie is loopier than yours’ game.

The title is wide open for the taking since the demise of Robert Mugabe.

I’m keen to see how Putin ups his game in the face of some outstanding competition.

Starting with the hair.

Close to home, the situation with Shite Highway 2 is worse than ever. Still taking lives, causing endless frustrations and inefficiencies, thanks to the Coagulation Government which ripped up its priority listing and threw it to the dogs.

Meanwhile, subdivisions and infill housing churns on regardless, with no thought to the increasing congestion on the northern route.

Mind-numbing stupidity from Twyford and this idealistic government that has spending priorities all wrong.

The grandiose scheme to build 100,000 houses, which the current government leaned on heavily to get accidently elected, is seriously short of quite a few zeros.

And the plan to plant a billion trees took a serious setback when I pulled two out of the ground with my Jeep.

Now I’ve got my chainsaw back from the nice folk at the Stihl shop, so you can kiss goodbye to another couple of glaciers and a handful of polar bears.

Single-use plastic bags got the heave-ho in what is largely a symbolic gesture of futility, because the planet is still producing oil-derived waste at record levels and chucking it with gay abandon into landfills.

And I use the word gay in its most sincere, traditional and reckless form.

Meanwhile, the Government has taken too much money off us and is refusing to hand it back.

So much tax that these robbers have amassed 7.5 billion of our dollars. That’s about $4000 per household and the rotters should return it. As the Taxpayers’ Union points out, Grant Robertson is “greedily hoarding taxpayer money”, despite his frivolous spending.

Any decent government would give it back as tax cuts to reward hard work and encourage economic growth. But not this crowd, they’re determined to milk the sad old taxpayer cow till it drops.

How about re-instating the Shite Highway 2 rebuild and spend some of the billions of surplus on actually helping taxpayers?

I see we are in the midst of local body elections and there are some great candidates amongst the muppets that again line up.

Seriously, some of these candidates are completely delusional if they think we are going to let them loose with our rates money. Mind you, we’ve elected plenty of muppets before, so why break with tradition. Thankfully for the first time in many decades, I’ve given zero attention to the situation, thanks mostly to anaesthetic and opioids. I have rejected many invitations to stand for council, mainly because I refuse to work with muppets, but also there’s some doubt whether I’d live through the term.

Several people have assured me I’d make a better councillor dead than the muppets have alive.

They could be right.

Next week: What has gone right? We’ll let you know if we find anything. 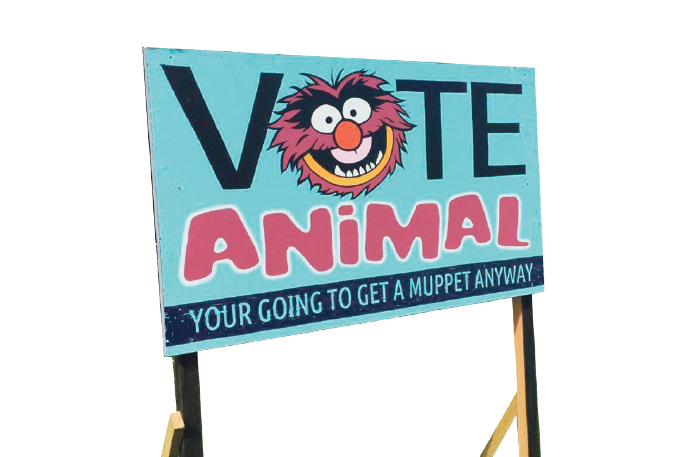